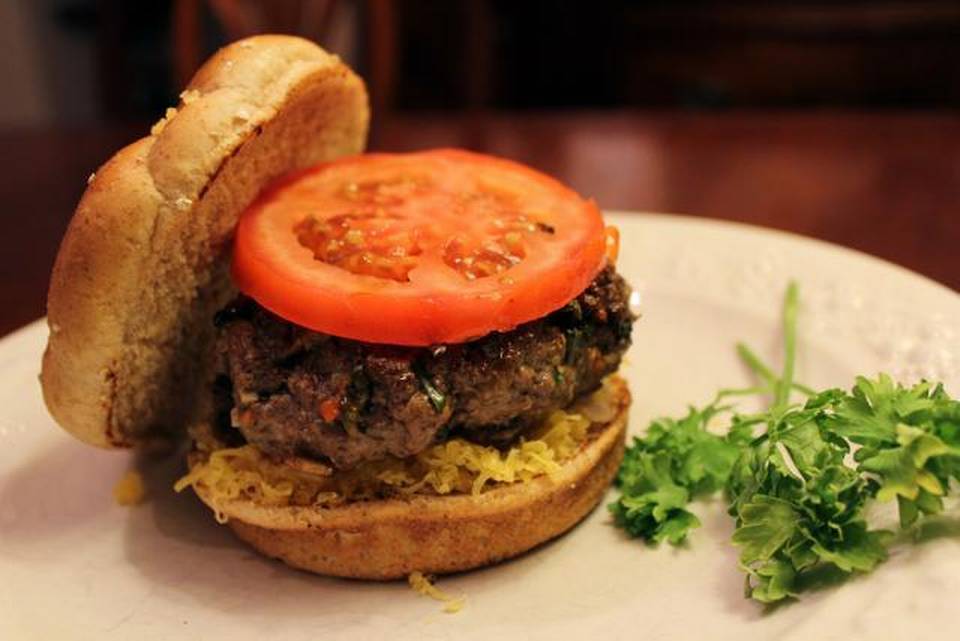 He was a soldier, a boxer, a hunter, a fisherman, a drinker, a father and the writer of words and stories that aimed to be, above all else, true and honest and pure.

He also knew how to make one hell of a hamburger.

Ernest Hemingway would have turned 115 this July, and the man behind acclaimed novels such as “The Sun Also Rises,” “A Farewell to Arms” and “The Old Man and the Sea” continues to generate reader interest – and not just in literary circles.

The culinary world buzzed about his work earlier this year when the recipe for “Papa’s Favorite Wild West Hamburger” – typed but with hand-written annotations – was released by John F. Kennedy Memorial Library and Museum in Boston.

But make no mistake: This burger is pure Hemingway, larger than life and full of adventure. Esquire magazine deemed it the manliest of quarter pounders, and The Times-Picayune called it “beautiful yet refined.”

The “Wild West Burger” recipe was found among thousands of digitized documents released by the library including papers congratulating Hemingway on winning the Nobel Prize in Literature in 1954.

After Hemingway’s death in 1961, President John F. Kennedy allowed Hemingway’s fourth wife, Mary Hemingway, to travel to Cuba (where the author lived from 1939 to 1960) and retrieve crates of papers and artwork, according to jfklibrary.org.

Mary Hemingway later exchanged letters with Jacqueline Kennedy to have the remainder of Ernest Hemingway’s work archived by the John F. Kennedy Presidential Library and Museum.

The Paris Review published a version of the recipe in September, but a scanned image of the yellowed document released by the library in February has editing marks with additional ingredients including the grated apples, cheese and carrots.

Ernest Hemingway’s granddaughter Mariel, recently in Sacramento as the keynote speaker for VegFest, said she thinks she first heard about the burger recipe from her cousin Edward.

“I found it amusing,” she said with a chuckle, adding that she hopes to try the recipe soon with buffalo meat.

A foodie in her own right, Mariel has written several books about healthy living and eating. Ernest Hemingway died months before Mariel was born, but her father spoke often of her grandfather’s love of food, she said.

She grew up eating a variety of cuisines like her grandfather, who lived in Italy, Spain, France, Cuba, Florida and Michigan.

These cuisines are reflected in the burger’s wide-ranging and assertive flavor profile.

The beginning of the recipe reads: “From Experimenting, Papa’s Favorite Wild West Hamburger. There is no reason why a fried hamburger has to turn out gray, greasy, paper-thin and tasteless. You can add all sorts of goodies and flavors to the ground beef – minced mushrooms, cocktail sauce, minced garlic and onion, ground almonds, a big dollop of Piccalilli, or whatever your eye lights on. Papa prefers this combination.”

Cooking at the Hemingway home was largely left to wife Mary, who, by looking at this recipe, could have been one of the first American fusion cooks, said Craig Boreth, the author of “The Hemingway Cookbook,” which was released in 1999 and re-released in 2012 (Chicago Review Press, $22, 240 pages).

“She pulled stuff from all over the place,” Boreth said, adding that she not only had to satisfy her husband’s eclectic palate, but also friends and guests from around the world.

Boreth’s book includes food-and-drink recipes, Hemingway family photos and passages about dining from stories including “A Moveable Feast,” “The Old Man and the Sea,” and “A Farewell to Arms.”

If you’re thinking about making “Papa’s Favorite Wild West Hamburger,” gathering the variety of ingredients is the first challenge. Here’s a shortcut:

•  India relish, which is basically a spicy, pickled vegetable relish, can be found at Cost Plus World Market;
• Walmart on Antelope Road carries Spice Islands Beau Monde;
• Spice Islands mei yen powder (discontinued years ago) can be homemade with nine parts salt, nine parts sugar and two parts MSG, according to an adaptation by The Paris Review. Then mix 2/3 teaspoon of the dry recipe with 1/8 teaspoon of soy sauce.
When all of the dry ingredients are mixed in the bowl, they smell like Thanksgiving stuffing.

Add the rest of the ingredients, including dousing the the meat in 1/3 cup of wine. Then “let the meat sit, quietly marinating, for another 10 minutes, if possible.”

Heat the oil and place four thick patties in the frying pan. The recipe’s cook time is spot on for a pink-in-the-middle burger.

Health-conscious folks might want to skip the MSG, but without it, the burger can be bland. Carrot shavings and capers add texture, and the apples provides a little sweetness.

As for a pairing, Boreth recommends a rough, red Italian wine.

Boreth said he admires the burger – not just for what’s in it, but because of its style.

“It shows a great international flare that he obviously had,” Boreth said.

1 egg, beaten in a cup with a fork

(verbatim from Hemingway’s original recipe) “Break up the meat with a fork and scatter the garlic, onion and dry seasonings over it, then mix them into the meat with a fork or your fingers. Let the bowl of meat sit out of the icebox for ten or fifteen minutes while you set the table and make the salad. Add the relish, capers, everything else including wine and let the meat sit, quietly marinating, for another ten minutes if possible. Now make your fat, juicy patties with your hands. The patties should be an inch thick, and soft in texture but not runny. Have the oil in your frying pan hot but not smoking when you drop in the patties and then turn the heat down and fry the burgers about four minutes. Take the pan off the burner and turn the heat high again. Flip the burgers over, put the pan back on the hot fire, then after one minute, turn the heat down again and cook another three minutes. Both sides of the burgers should be crispy brown and the middle pink and juicy.”